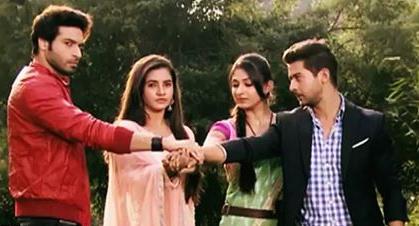 The duo couples love is showcasing churning twist and turn in their lovey-dovey life.

So far we have seen that Suraj (Vijyendra Kumeria) and Chakor (Meera Deosthale) have bloomed their intense love amid rainy-rain day in Lucknow.

Beside this Ajay (Sehban Azim) had brought Imli back to Azadganj.

Vivaan and Imli to forgive Suraj and Chakor

Vivaan saves Imli from Villagers havoc and scolds Villagers not to dare again for humiliating his wife Imli.

It seems that the duo will confess their love soon as Vivaan shown his care towards Imli.

At last but not the least Suraj will confess his reason for betrayal saving Imli to Chakor.

Stick around with www.serialupdate.in for more exciting updates.

Ishq Mein Marjawan 2: Kabir and Riddhima get secretly locked by Vansh in house